All types of esophageal cancer surgeries can be performed either by conventional open method or robotic or laparoscopic method [VATS (Video Assisted Thoracoscopic Surgery) or Thoracoscopic Esophagectomy or Minimally Invasive Esophagectomy]. Robotic or Laproscopic cancer surgery has several advantages over conventional open surgery with same cure rate. Open surgery requires chest to be opened and is every painful for the patient. However, only surgery is curative treatment available for esophageal cancers. Additional therapies (chemotherapy & radiotherapy) are mostly supportive. With these advanced techniques the trauma to the patient is much less and this makes the treatment more acceptable. 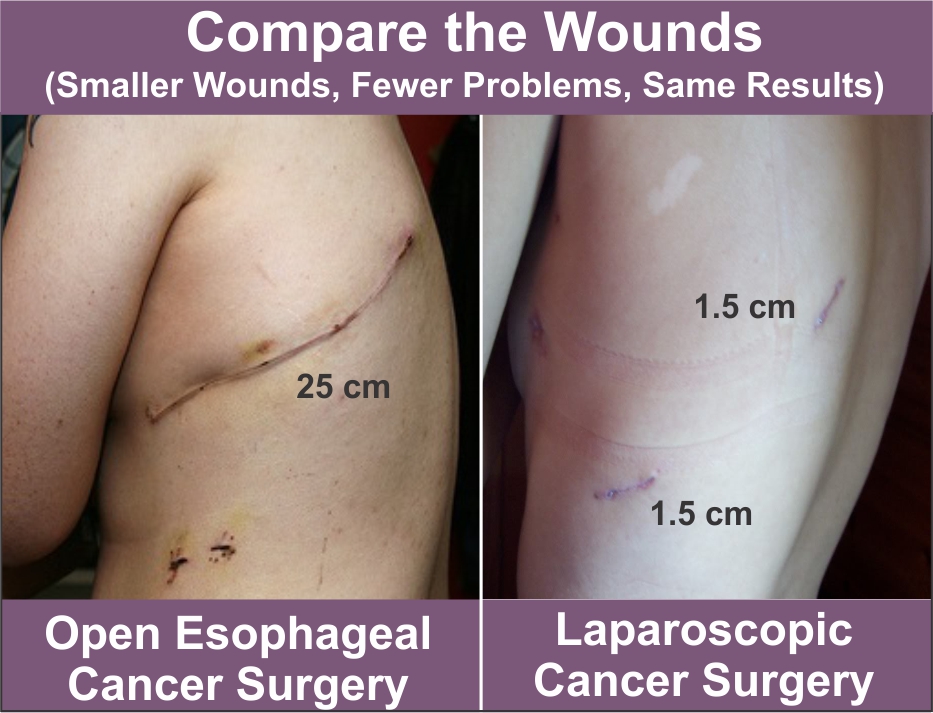 Apart from above the advantages specific to esophageal cancer include

What Is Esophagus Cancer(Food Pipe Or Gullet )?

Esophagus (food pipe or gullet) is a muscular tube connecting the throat (pharynx) with the stomach. The esophagus is about 40 cm long and it starts in the neck and ends in abdomen. The esophagus runs behind the windpipe (trachea) and heart, and in front of the spine inside the chest. Within the chest it is divided into three parts for the ease of treatment: upper, middle and lower thoracic (chest) esophagus. Just before entering the stomach, the esophagus passes through the diaphragm. The cancer of esophagus arises from the innermost lining (mucosa). It can be predominantly of two types: adenocarcinoma & squamous cell carcinoma. Adenocarcinoma is commoner at the lower end of esophagus, whereas, squamous cell carcinoma is commoner in to neck, upper and middle thoracic portions. 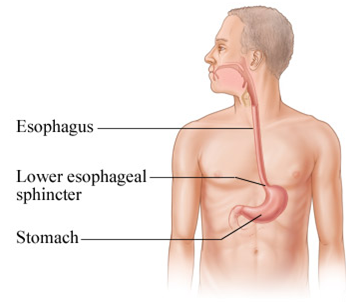 Colonic cancers can come with anemia due to slow loss of blood or with obstruction to bowel. However, these symptoms occur only when the disease is infiltrated locally. Screening methods are available that can detect colonic and rectal cancer before symptoms appear (stage 0). When detected early, these cases can be cured with much simpler surgery.

There are no early symptoms for esophageal cancer. The most common symptoms that appear after the disease grows are:

Endosopic examination of the esophagus and stomach provides the tissue sample for confirmation of the cancer.

The definite stage of esophageal cancer can only be confirmed after surgery. At present surgery is the only treatment that can cure this cancer. Most of the treatment is planned based on CT scan or PET CT scan staging.

These are cancers that are limited to the innermost layer (mucosa) and the layer just deep to it, but, not reaching the muscle layer. At this stage the cancer is usually not symptomatic. These are diagnosed mostly by chance (unless in a screening program). These treated with endoscopic surgery or esophagectomy depending on additional investigations.

In patients most of these patients, surgery may be the initial treatment. Other option that is very often opted is to give chemotherapy with radiation therapy to the tumor followed by surgery. However, surgery is the only treatment that can cure this cancer. This increases the chance of cure, but, increases the risk of complications during and after surgery. The surgeon takes the decision based findings. Chemotherapy alone before surgery helps in some cases only.

Stage III includes locally advanced cancers where the treatment can be surgery when it is possible. However, if some important structures like major blood vessels or heart is involved, surgery would not be possible. In these cases a combination of chemotherapy and radiotherapy is preferred.

Surgery for supportive care: When curative surgery is not feasible or is delayed due to chemotherapy or radiotherapy, surgery may be used to help patients eat and relieve the difficulty is swallowng. This is called supportive or palliative surgery.