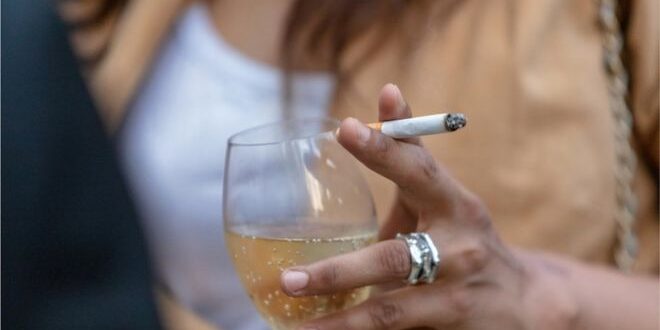 The public associates alcohol with liver disease but are generally not aware that it is the fifth leading cause of cancer.

Worldwide the drinking rates are continuing to increase in many countries.  This is in way related to the way alcohol is portrayed. Wine was portrayed to be safe and to some extend protective against heart diseases. This has lead to the acceptence drinking alcohol. So, it came as a socker for many when a new UK based study showned that drinking a bottle of wine per week is equivalent to smoking 5 to 10 cigarettes a week when it comes to increasing the lifetime risk of developing cancer.

The study also noticed that there is difference between women and men. For women it was the risk breast cancer. Among men it increases the risk of all cancers. It was compared to cigarettes to help raise public awareness of the risk between alcohol and cancer. The results of the study was published in BMC Public Health in the month of March 2019. This is the first research paper to have compared the effect of tobacco use with alcohol.

The paper starts by saying ‘we must first be absolutely clear that this study is not saying that drinking alcohol in moderation is in any way equivalent to smoking’. The analysis also looked at cancer in isolation, and alcohol causes other health problems which need to be considered.

One Bottle of Wine Ups the Risk

In this study the authors used the lifetime cancer risk data from Cancer Research UK to calculate the possible lifetime cancer risk associated with consuming 10 units of alcohol or 10 cigarettes per week. Following that alcohol and tobacco attributable fractions were then subtracted from lifetime general population risks. This was then multiplied by the relative risk of drinking 10 units of alcohol or smoking 10 cigarettes per week, and increasing levels of use to calculate the individual risks. This is a complex statistical analysis.

The results showed that among nonsmoking men, the increase in the absolute lifetime risk of cancer from drinking one bottle of wine per week was 1.0%, while for nonsmoking women, the risk was about 50% higher at 1.4%. Women had much higher increase in risk compared to men.

It is also very interesting to note that in men, the increased cancer risk manifested primarily in gastrointestinal cancers (eg, oropharynx, esophageal, colorectal, liver), whereas, in women, breast cancer accounted for 55% of additional cases. The authors emphasized that this finding was important because smoking is also an important cause of GI tract cancers but not so much for breast cancer. Therefore, if 1000 men and 1000 women each consumed one bottle of wine per week, an estimated 10 men and 14 women would develop cancer as a result.

Not surprisingly, as the amount of alcohol intake increased, so did the lifetime risk of alcohol-related cancers. Drinking three bottles of wine per week or about half a bottle per day, was associated with an increase of absolute lifetime cancer risk to 1.9% in men and 3.6% in women, or 19 in 1000 men and 36 in 1000 women, respectively. This extrapolated to smoking about eight cigarettes per week for men and 23 cigarettes per week for women.

Some people may argue that there may be a protective relationship between alcohol and heart disease, it is unclear and there may be other explanations for the relationship. Even if such a protective effect is real, it only relates to heart disease and there are hundreds of other conditions which alcohol increases the risk for, including cancer. There was a time when studies sponsored by tobacco industry showed that tobacco was good for health. We belive that the same is happening to alochol industry today. Most serious researchers are clear that there are no health benefits from drinking. It appears that these studies are often bought up by the alcohol industry showing that alcohol is beneficial, overall their findings have now been discredited, often due to the fact that the teetotalers in these studies have abstained due to health reasons and therefore skewed the data. There is now robust evidence that low levels of alcohol intake do not provide any protective health benefits. The World Health Organization’s International Agency for Research on Cancer, the World Cancer Research Fund, and the American Institute for Cancer Research have all stated that no level of alcohol consumption is completely safe.

While the health risks of smoking are well established and widely understood by the public, the situation is different with alcohol, especially as it relates to cancer. Even though studies have established alcohol drinking as a risk factor for multiple malignancies, awareness in the general public is low and this needs to improve.