The Concepts Of Gastric Cancer Surgery

The treatment of gastric cancer is mainly surgical. Chemotherapy and radiotherapy may be used in adjuvant setting depending on the stage of the disease. In most of the countries except in countries where screening for gastric cancer is performed, the disease is detected late. This is due to lack of specific symptoms associated with the condition.

Types And Definitions Of Gastric Surgery 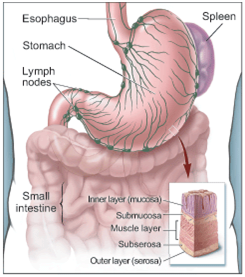 Curative surgery: According to Japanese Gastric Cancer Treatment Guidelines 2010, a curative surgery by definition needs a proximal margin of at least 3 cm for T2 or deeper tumors with an expansive growth pattern (Types 1 and 2) and 5 cm for those with inﬁltrative growth pattern (Types 3 and 4). When this is not feasible it is advisable to examine the proximal resection margin by frozen section. For fundic tumors invading the esophagus, a 5-cm margin is not necessarily required, but frozen section examination of the resection line is desirable to ensure an R0 resection. For T1 tumors, a gross resection margin of 2 cm should be adequate. When the tumor border is unclear, preoperative endoscopic marking, by clips or tattooing is advisable.

Modiﬁed surgery: The extent of gastric resection and/or lymphadenectomy is reduced compared to standard surgery.

Reduction surgery:The role of gastrectomy is unclear in patients with advanced gastric cancer with unresectable metastatic disease in the absence of symptoms such as bleeding or obstruction which would need palliative surgery. The procedure is only investigational. A randomized controlled trial to explore this issue is underway as an international cooperative trial. 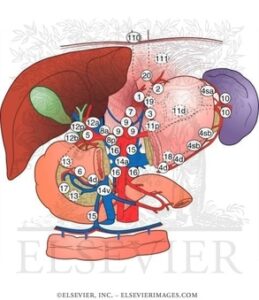 The extent of lymph node dissection is still a matter of debate. The oncological value of extensive nodal dissection has not been proven. The maximum amount of work on gastric cancer has been published by the Japanese. The Japanese Gastric Cancer Association in its treatment guidelines has classified lymphnode dissections based on the location of tumor and type of surgery performed in the following manor:

Total gastrectomy for cancer of fundus or body:

Distal or Subtotal Gastrectomy for distal body or pylorus:

In Japan and Korea D2 is considered standard of care. However, there is no evidence to support this. There are two european trials (MRC and Dutch) comparing D2 with D1 in randomized fashion. Both these trials were marred by lack of surgical standardization. In these D2 dissection had much high complication and postoperative death rates. This was attributed to splenectomy and distal pancreatectomy that was performed as a part of standard D2 dissection. Some newer trials like the Italian trial which have tried spleen and pancreas sparing D2 gastrectomy and have shown better surgical outcomes. Long term survival in both Italian and Dutch trial seems to be better for D2 gastrectomy.

The role of extended lymphadenectomy was studies by Japan Clinical Oncology Group. This was a randomized trial to compare D2 with D3 (para-aortic lymphnodes). However, they found the results to be in favor of D2 surgery.

The first laparoscopic gastric surgery was performed in 1992 by Peter Goh of Singapore for a chronic gastric ulcer. The first laparoscopic wedge resection for gastric cancer was carried out by Ohgami et al also in 1992. In same year Ohashi et al described intragastric mucosal resection for early gastric cancer located in the posterior wall. The first oncologically sound distal gastrectomy with D1+ nodal dissection was reported in 1994 by Kitano et al. Since then various forms of gastrectomies have been performed laparoscopically. The recent advances in techniques and technology has made this possible. Today all the standard gastrectomies for early gastric cancer can performed laparoscopically.

Studies have shown that MACS for gastric cancer has obvious advantages of being minimally invasive and has the same short and long-term efficacy as that of traditional open surgery in the treatment of early gastric cancer. The Japanese gastric cancer treatment guidelines have included laparoscopy-assisted gastrectomy as the standard procedure for early gastric carcinoma from 2002. Recently Korean Laparoscopic Gastro-intestinal Surgery Study Group presented the interim results of KLASS trial comparing the short and long-term outcomes of MACS with open distal gastrectomy for early stage gastric cancer. They found no significant difference of morbidity and mortality between open and MACS. This is a large trial (700 patients) with standardization.

More than 60% of gastric cancers diagnosed are advanced malignancies (T3/4 and Node positive). With the acceptance of MACS for early gastric cancer some centers have started work on advanced gastric cancers. Technically at present all types of gastrectomies even in advanced can be performed laparoscopically. The results available at present indicate that laparoscopic D2 dissection is safe, with less blood loss than open surgery, and can achieve the same radicalness as open surgery for gastric cancer. At present open D2 dissection is the standard of care as per Japanese guidelines. A recently published Chinese study by Chen et al of more than 1000 patients comparing open with MACS has concluded that laparoscopic surgery is not only feasible but also oncologically safe and has similar outcomes as open surgery.