The Unique Anatomy Of Esophagus

Esophagus or food pipe is the structure that connects pahrynx (back of the mouth) to stomach, via thorax (chest). Thus it passes through 3 anatomical areas namely, neck, thorax and abdomen. This anatomy is the reason for complexity of the surgical procedure for this cancer.

Esophagus is approximately 25 cm long muscular tube. It can be arbitrarily divided into 4 parts; cervical, upper thoracic, mid thoracic and lower esophagus. Endoscopically this would correspond to 15 cm from incisor to 20 cm, 20 to 25 cm, 25 to 30 cm and 30 to gastroesophageal junction respectively.Tumors involving gastroesophageal junction and/or with their epicenter within 5 cm of the junction are treated akin to lower esophageal cancers.

Due to this unique anatomy, lymphatics from esophagus can drain into cervical, mediastinal or upper abdominal nodes.

The cancers arising from the epithelium of esophagus can be of two types; squamous cell carcinoma (SCC) or adeno-carcinoma (AC). Usually SCC occurs in the cervical, upper or mid thoracic esophagus. It is rare in lower esophagus. Whereas, AC is mainly seen in the lower esophagus and gastroesophageal junction, and often secondary to long term gastro-esophageal reflux disease. Though there is no major difference between the outcomes of the two histological types, the adjacent therapy varies.

Concepts Of Treatement For Esophageal Cancer

Surgery has been the treatment of choice for localized and respectable cancers of esophagus. However, multi-modality therapy has come into existence as surgery alone has failed to alter the course of the disease. The results of multimodality approach have not been consistent. Controversy exists in every aspect of treatment of esophageal cancer. A subjective approach is suitable for this disease.

The idea of surgical resection of esophageal cancer is to resect the diseased portion with adequate margins. However, due to the unique location of esophagus (vide supra) esophagectomy is a complex surgery.

The Approaches can be Classified into Two Types:

Trans-Hiatal Esophagectomy (THE): This involves a laparotomy and cervical approach. The thoracic esophagus is dissected bluntly buy surgeons hand. This surgery was popularized by Orringer et al. who have published a series of more than 1000 in 1999. Though THE reduces the post-operative thoracic complication rates, the approach makes it difficult to perform a complete nodal dissection or en-bloc dissection. For cancers of lower esophagus and gastro-esophageal junction, it is possible to perform wide dissection by THE.

Trans-Thoracic Esophagectomy (TTE):There at least four approaches that can be discussed under the heading of TTE.

Controversy exists as to which approach is superior. The clinical trials have not been able clear these controversies. A Dutch trial comparing THE with TTE did not show significant difference in survival between the groups. However, there is a trend towards better survival for those who underwent TTE. 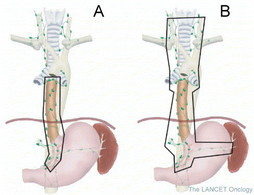 The survival statistics following traditional esophagectomy, where the nodal tissues are not removed, have been dismal. In order to improve the survival some centers have tried more radical approaches. Two concepts guide these extended approaches.

En-bloc resection: This involves resection of the tumor bearing esophagus along with surrounding structures as envelope. Thus pleura laterally, pericardium anteriorly, azygos vein and thoracic duct posteriorly are excised along with the fibrofatty tissue around esophagus. Diaphragmatic hiatus is resected for tumor at gastro-esophageal junction.

Systematic lymph node dissection- 2 field or 3 field: Two field lymphadenectomy involves dissection of nodes from tracheal bifurcation to esophageal hiatus. In the upper abdomen nodes along celiac trunk and its branches (except splenic artery), and along portal vein are dissected. A three field dissection, in addition to two field, should include nodes along splenic artery, recurrent laryngeal nerves and lower cervical groups.

Though extended approaches have shown to be beneficial, most of the data on these surgeries are retrospective and single institutional

Why should we prefer macs for esophagus ?

All the open surgical approaches described above have been performed using MACS techniques. MACS techniques that have been published include both total thoraco-laparoscopic THE or Ivor Lewis or McKeown approach, and also hybrid procedures with at least one of the approaches being done via either laparoscopy or thoracoscopy. The initial publications involving MACS esophagectomy were mostly single institutional series which showed outcomes comparable to open surgery paving way for further acceptance of the MACS. The data that accumulated over the years has been pooled and analysed by six groups of authors in the past few years. These mata-analysis are large and involve mostly case control studies and retrospective studies comparing open with MACS esophagectomy. The recent systematic review by Dantoc et al. comparing open to MACS consisted of 17 case-control studies and the review showed no signiﬁcant diﬀerences in 30-day survival or 5-year survival rates. The nodal yield was significantly higher in the MACS. A large meta-analysis by Biere et al. observed that MACS esophagectomy had less major morbidity, pulmonary complications, anastomotic leakage, mortality, length of stay, operating time, and blood loss, but statistical signiﬁcance was not reached.

These studies have observed a total complication rates ranging from 38% to 46% and operative mortality rates ranging from 1.3% to 4.3%. The overall observation is suggests that MACS is oncologically safe and survival are not signiﬁcantly diﬀerent from open surgery. Whereas, overall morbidity might be possibly improved with MACS esophagectomy. However, there is a need for randomised control trial to give authentic data. Traditional Invasive versus Minimally invasive Esophagectomy (TIME) trial which is designed to answer some of these questions. This is a ﬁrst prospective, multicenter, randomized study comparing open versus MACS. In this study proposal, patients will be randomized to either traditional open Ivor Lewis esophagectomy or MACS esophagectomy. For the MACS group, THE would be the preferred method while the Ivor Lewis esophagectomy will be performed if more of a gastric resection margin is necessary based on location of the tumor. This trial has just started recruiting and will be sometime before results would be out.

MACS esophagectomy is integral tool in the treatment of esophageal cancer that is oncologically safe and eﬀective. Though there are several advantages of MACS, randomized studies comparing open with MACS esophagectomy are necessary if any conclusion is to be made about the superiority of one surgical technique over the other. Further studies are warranted to determine if it should be the gold standard procedure.