The Concept Of Surgery In Kidney Cancer 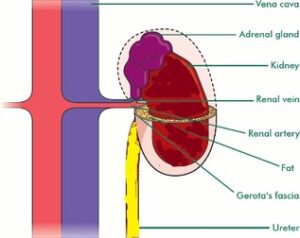 Renal Cell Carcinoma (RCC) is one of those diseases where surgery is the only curative modality of treatment. Even when metastasis (distant spread) is present, surgical therapy in the form of cytoreductive nephrectomy is helpful for the patient. Traditionally open radical nephrectomy has been practiced. This involves removal of the kidney along with the Gerota’s fascia (fat cover around kidney) as envelop. This envelop avoids exposure of tumor tissue and prevents spillage. Dissection of para-aortic and para-caval lymphnodes have not shown survival advantage. However, they need to be removed when they are enlarged or positive. Unlike many other cancers there is no effective adjuvant therapy like chemotherapy or radiotherapy for RCC. Only in metastatic cases targetted therapies (sunitinib, sorafenib, everolimus, etc.) have shown some results.

Less than 7cm sized tumor (T1): The widespread use of contemporary imaging techniques has resulted in an increased detection of small incidental renal tumors. In the past few years the concept of cancer surgery has taken a U-turn giving way to the concept of Nephron Sparing Surgery (NSS). This is a procedure where only the diseased portion of the kidney is removed along with Gerota’s fascia adjoining it, sparing health tissue. Renal vessels are clamped after packing the kidneys with ice to reduce ischemia.This is especially useful in patients with single kidney, bilateral RCC, hereditary renal cancers or in those patients where there is a risk of kidney failure in future. Recent research has shown that in properly selected cases the survival outcomes of NSS are similar to radical nephrectomy. Thus NSS has become standard of care even for patients with normal opposite kidney when tumor size if favorable and is recomended by American Urological Association and European Association of Urology. Though NSS is the standard of care for tumors upto 4 cm in size, many centers have extended the indications to RCC’s less than 7cm. Definite contraindication for NSS would be presence of distant or nodal metastasis. Nephron Sparing Surgery can be repeated on ipsilateral recurrent RCC in previously performed NSS.

More than 7 cm sized tumor: Radical nephrectomy remains the standard of care for tumors larger than 7cm in size. However, some centers have tried NSS upto 10cm tumor size. It is not standard of care.

Nodal disease: When spread to regional lymph nodes (paraaortic or caval) detected prior to surgery or on table, a complete lymphnode dissection is performed. Reduction in tumor burden helps the outcomes in renal cancer.

Metastatic Renal Cancer: Cytoreductive nephrectomy to reduce the tumor burden is performed when overall condition of the patient permits the same. Patient is placed on targeted therapy following the surgery.

Ralph Clayman performed the first Laparoscopic Nephrectomy in 1991. Over time laparoscopy has gradually evolved into standard of care for renal tumors. Laparoscopy produces low overall morbidity, faster post-operative recovery, and comparable oncologic outcomes compared to other techniques. There is sufficient literature to on the feasibility and the excellent oncologic efficacy of laparoscopic radical neprectomy.

Laparoscopic Nephron Sparing Surgery (LNSS): Laparoscopic NSS was first tried in porcine model in 1993. The indications are same as mentioned in the above para on NSS. Classically, only small, superficial, peripheral, exophytic tumors were eligible for laparoscopic NSS, but larger, infiltrating tumors have been managed in more recent series. The use of LNSS has expanded to technically challenging tumors, such as tumors invading deeply into the parenchyma up to the collecting system or renal sinus, intrarenal tumors, tumors abutting the renal hilum, tumors in solitary kidneys, or tumors substantial enough to require heminephrectomies. Many recent series include larger, Stage T1b (4-7cm size) tumours; endophytic tumours near the hilum and upper pole; bilateral tumors; multiple ipsilateral tumors; and stage T1a tumours presenting in select patients over the age of 70.

There are certain technical difficulties that need consideration in performing LNSS. These include the difficulty in achieving renal hypothermia, renal parenchymal hemostasis, pelvicalyceal reconstruction, and parenchymal renorraphy by pure laparoscopic techniques. In 2009, an expert international panel recommended a warm ischemia time of <20 minutes, and that in difficult cases, cold ischemia be started immediately and should not exceed 35 minutes.

When compared to open NSS there is significant reduction in morbidity in LNSS. Investigators from Cleveland Clinic analyzed the complications of their initial 200 cases treated with LNSS for a suspected renal tumor and reported complications in 33% of patients: 18% patients had urologic complications, the majority of which was bleeding, and 15% patients had non-urologic complications. This experienced team also reported a decreased complication rate (16%) since they began using a biologic hemostatic agent as an adjunctive measure. Gill et al[ compared 100 patients who underwent LNSS with 100 patients who underwent open NSS. Laparoscopic group needed longer operative time (3 hours vs 3.9 hours), slightly more blood loss (125 ml vs 250 ml), and but has less warm ischemia time (28 minutes vs 18 minutes). Also, the laparoscopic group required less postoperative analgesia, a shorter hospital stay, and a shorter convalescence. Intraoperative complications were higher in the laparoscopic group (5% vs 0%), and postoperative complications were similar (9% vs 14%). Functional outcomes were similar in the two groups (postoperative serum creatinine,1.1 vs 1.2 mg/dl). Similarly, Beasley et al retrospectively compared the result of laparoscopic versus open using a tumor size-matched cohort of patients. Although the mean operative time was longer in the laparoscopic group (210 ± 76 minutes versus 144 ± 24 minutes) blood loss was comparable between the two groups (250 ± 250 ml vs 334 ± 343 ml). No blood transfusions were performed in either group. The hospital stay was significantly reduced after LNSS compared with the open group (2.9 ± 1.5 days vs 6.4 ± 1.8 days). These initial results have been reproduced in recent studies.

Nouralizadeh, A., et al have retrospectively compared operative and post-operative complications in patients who underwent LNSS for tumors > 4cm to those who underwent LPN for tumors < 4cm. They have concluded that there were no significant differences observed with respect to operating time, transfusion requirements, post-operative complications, or hospital stay, suggesting that LNSS, from a morbidity standpoint, is feasible for tumors > 4 cm in carefully selected patients.

Despite the absence of a prospective randomized controlled trials, these series suggest less morbidity for LNSS relative to open NSS.

The studies comparing oncological outcomes of open with LNSS have shown similar results for the two techniques. Gill IS et al in their large stusy involving 1800 cases have demonstrated a 3 year cancer-specific survival for patients with a single cT1N0M0 RCC to be similar for open and LNSS (99.3% LNSS and 99.2% open). In a 5 year, intermediate-term study, comparing laparoscopic radical nephrectomy with LNSS for T1b-T3N0M0 RCC by Simson et al showed, overall mortality (11% in each group), cancer-specific mortality (3% in each group) and recurrence (3% vs 6%) rates. Recurrence-free survival in each group was 96%.Lane BR et al have published the longest follow-up study to date, a retrospective 7-year follow-up study comparing oncologic outcomes of LNSS and open for a single cT1 cortical tumor 7cm or less. Metastases free survival with a minimum of 7 years follow-up was equivalent in both groups (97.5% LNSS vs. 97.3% open). After multivariable analysis that accounted for the propensity to undergo LNSS, surgical approach was not associated with a significant difference in the odds of metastases (OR 2.18, 95% CI 0.85-5.89).

Porpilgia et al published a retrospective case series of 100 consecutive patients undergoing LNSS for tumors < 4 cm and tumors greater than 4 cm, demonstrating that in spite of statistically significant differences in tumor size and location, the incidence of positive surgical margins was equivalent and acceptable pathologic results were achieved in both groups. Similarly, a study by Ching CB et al, comparing bilateral open to bilateral LNSS for bilateral kidney tumors demonstrated equivalent cancer-specific and recurrence-free survival rates in both groups over a mean follow-up of 5.5 years. These results have established LNSS as a standard of care for carefully selected RCC’s.

Laparoscopic Radical Nephrectomy (LRN): With evidence available today LRN has emerged as a standard of care in most patients with T1 RCC who are not candidates for LNSS. Most of the initial studies on LRN which standardized the procedure were on small tumors (T1a), which now are being treated with LNSS. In the recent past the results are for larger tumors that are confined to kidney (T2) have emerged from some studies. Dunn et al reviewed the 9-year experience of LRN at Washington University. All tumors in this series were ≥4 cm and ＜10 cm. The operative time was longer in LRN than in open radical nephrectomy (ORN). However, the estimated blood loss was significantly less and hospital stay was significantly shorter. Steinberg et al compared the operative outcomes for LRN and ORN in T2 RCC (tumors >7cm, limited to kidney), LRN was associated with a shorter operative time (180 minutes vs. 207 minutes), reduced blood loss and a shorter hospital stay. Kim et al retrospectively evaluated the results of LRN and ORN groups with respect to T2 RCC showed similar results. The operative times for LRN for T2 RCC varies between institutions; however, the blood loss and the length of the hospital stay were generally less in LRN than in ORN. Akin to LNSS, LRN can also be performed transperitoneally or retroperitoneally. However, transperitoneal approach is the most preferred one.

Long-term oncologic outcomes of LRN have been studied by few authors. Portis et al analyzed 64 patients undergoing LRN and 69 patients undergoing ORN and reported a similar survival rates for both ORN and LRN. In a study by Hemal et al a total of 112 patients with pathological T2 RCC treated with LRN and ORN, and their outcomes in the form of 5-year overall, cancer-specific, and recurrence-free survival rates were similar. Berger et al presented 5 year oncologic outcomes of 73 LRN patients and their overall, cancer-specific, and recurrence-free survival rates for LRN in T2 RCC were 81.0%, 90.0%, and 92.0% which was comparable to results of ORN in other series. Another recently published (2011) retrospective review by a Korean group comparing longtern outcomes in T2 RCC between ORN and LRN also showed similar outcomes. In these retrospective reviews, the authors demonstrated that long-term survival after LRN was equivalent to that after ORN.

Apart from general contraindications the are applicable to abdominal laparoscopic surgery, specific absolute contraindications to LNSS include bleeding diathesis (such as platelet dysfunction and bloodthinners), renal vein thrombus, and aggressive locally advanced disease. Tumors invading the IVC or renal vein (T3) or Direct invasion of adjacent structures (T4) should not be considered for MACS. Tumors larger than 10 cm are relative contraindication for LRN. As with all other MACS, the ultimate decision to proceed with Laparoscopic surgery or not should be based on the tumor characteristics and the surgeon’s skill and experience with such an approach.

There is enough evidence to suggest MACS for RCC as standard of care in tumors smaller than 10 cm in size. Both partial (NSS) and radical nephrectomy can be performed by MACS trechniques. Caution should be exercised in selecting larger tumors for LRN.